Civic Initiative in Education, supported by DVV International Armenia, initiated a large scale participatory public discussion to help define the new agenda in education that capitalizes on the changes happening in Armenia’s political and social life. 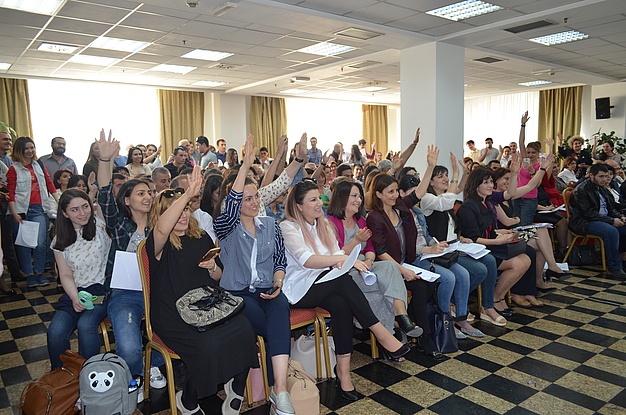 Civic Initiative in Education, supported by DVV International Armenia, initiated a large scale participatory public discussion to help define the new agenda in education that capitalizes on the changes happening in Armenia’s political and social life. The event was held on May 18, 2018 and attracted almost 200 participants including teachers, students, University professors, education experts, parents and others.

The event started with the representatives of the Initiative presenting their vision and framework of Armenia’s education system, which is grounded in human rights and social justice approach ensuring equitable quality education for all. The Initiative’s list of priority actions required in all aspects of education (from early childhood to adult education) were also presented to the audience.

Then the floor was opened for remarks and speeches by the participants who raised several issues and concerns with respect to the current situation in education ranging from the quality of textbooks to inactivity of school boards to involvement of adolescents in decision making  and numerous other questions.

Arayik Harutyunyan, the newly appointed Minister of Education also joined the discussion and had a chance to hear a summary of issues, concerns and questions raised by participants. He emphasized the need for such participatory forums and platforms in defining the Government’s program and in terms of public monitoring.

The Civic Imitative in Education was established on 2017  by a group of individuals and organizations concerned about equity, social justice and related issues in education aiming to monitor and influence g education sector reforms. DVV International in Armenia is involved in the Initiative through efforts to enhance understanding of adult education and lifelong learning on public and government level, as well as supporting the general public discourse on education as part of its overall vision that democratic participation is essential for positive developments in a society and is an effective way of adult education.