In the afternoon of July 17, 2020, one could see residents of the city of Sevan stopping to observe, fascinated, what was happening in some of their central streets. 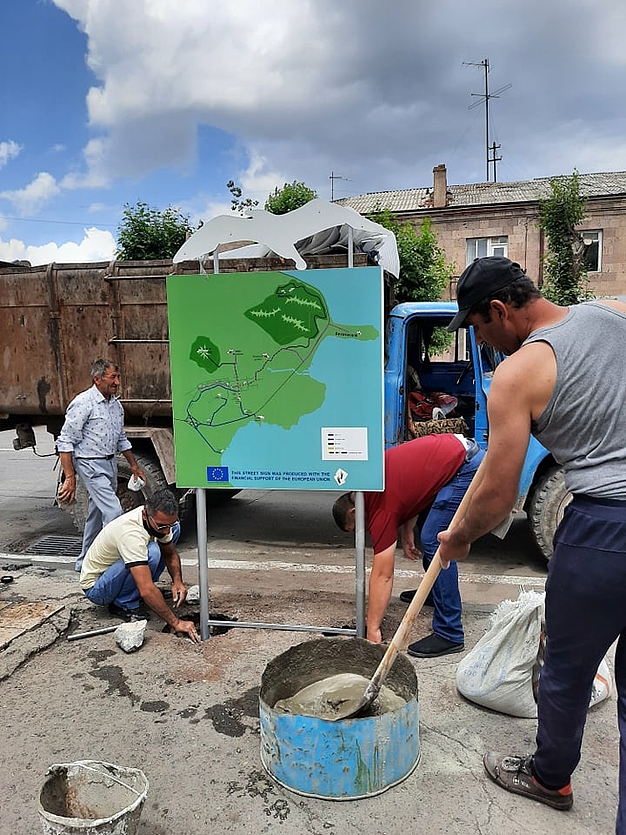 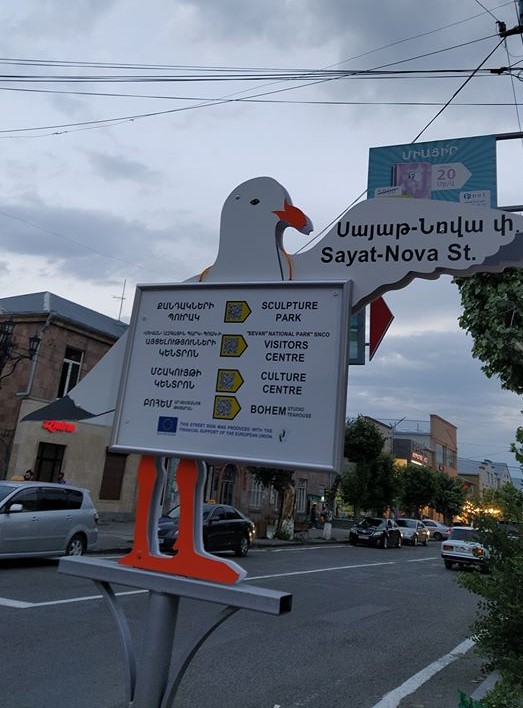 In the afternoon of July 17, 2020, one could see residents of the city of Sevan stopping to observe, fascinated, what was happening in some of their central streets.
It appears that in the post-Soviet era, for over 30 years, there have been no street signs in Sevan. People know that this one is Shahumyan street and the other one is the Energetics street, but for a tourist or a guest, Sevan has been a maze of nameless streets for too long.
Thus, for Sevan residents it was a happy moment to follow the municipal truck moving from spot to spot to place the 11 street signs, one touristic  destination map and one info board designed and prepared by Sevan Youth Club NGO, the recipient of a sub-grant under the EU4Culture: Stronger Communities and Initiatives  Project.
As Gohar Mnatsakanyan, head of the NGO emphasized, for them it was important to come up with a creative idea that would not only mark the town’s streets, but also make it a more inviting space for tourists, both from outside Armenia and visiting Armenians.

Armine Ghukasyan, a resident of Sevan that stopped to see how one of the signs being placed, said she was happy to see something the city planned for years to become a reality making the city appear better, closer to the standards suitable for a lakeside city.

So, a few months ago they announced a call for ideas, and after a lot of barnstorming, debate and discussion agreed that the idea of a seagull is symbolic for the area. In several street intersections  the seagull signs wings point to the street that leads to a number of touristic destinations both inside the town and nearby, which are also listed on the sign. If you are technology savvy, you could also  scan the QR code on the sign and learn more about the sites it directs too.

Sargis Muradyan, head of Sevan community believes that this initiative adds color to their city making it more attractive to tourists  and that more signs will soon appear in the streets of Sevan.

Grigor Muradyan, the sculptor who came up with the idea, is a volunteer of the Sevan Youth Club. He says one can always see a seagull flying over the city or sitting on top of a poll, so this is where his inspiration came from.

While the touristic inflow has suffered a lot from the COVID 19 pandemic, and the visitors may be guided by these signs only next summer, the smiles and approval of Sevan residents is the great reward for the Sevan Youth Club and the municipality that  partnered to make this initiative a reality.

EU4Culture: Stronger Communities and Initiatives is implemented by the Institute for International Cooperation of the German Adult Education Association (DVV International), Media Initiatives Center, Armenian CIVITAS NGO and Association of museum workers and friends with financial support of the European Union.