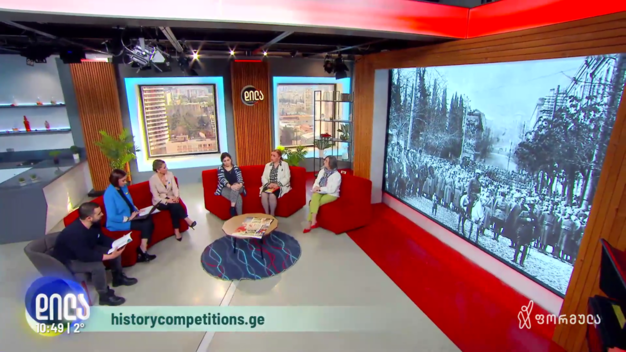 Mariam Kereselidze from DVV International Caucasus and South Europe spoke about the concept of this year's theme (presenting the poster of the project), about the history of the competition, how the Körber Foundation started presidential competition in Germany in the 70s, which has since spread to other countries in Europe. Then in 2001, the EUSTORY network was founded, uniting all participating countries. She stated that in our region five countries participate and that Ukraine continues to participate despite the war.

Nana Tsikhistavi from GAHE talked about tutor training the project has conducted. She said that the project team first selected tutors all over Georgia with the help of questionnaires and the Ministry of Education supported this process. She listed the formats in which the participants can submit their works (papers, essays, photo collection, posters, and video).

Rusudan Kobakhidze from SovLab spoke about how important it is to experience people's history because many things cannot be found in books. These experiences have to be taken into account, which can be seen especially in the example of Ukraine, that they have done so. That it is very important for pupils to find out for themselves, to create for themselves. Of course, they have to analyze in the process, but even the method of how and what they choose from their raw materials shows their attitude towards the subject. For example, last year's winners told in their paper how they started looking for sources, finding nothing in the library, and then started interviewing people.

Nana Tsikhistavi adds that apart from interviews, students have to learn how to work with archival materials, with maps, that is, different sources, which is also what our tutor training on relevant topics was for. Tutors decide themselves how many students they work with. Also this year, the best works will be published.