This year’s award ceremony for the Givi Margvelashvili Prize took place at a very special location. 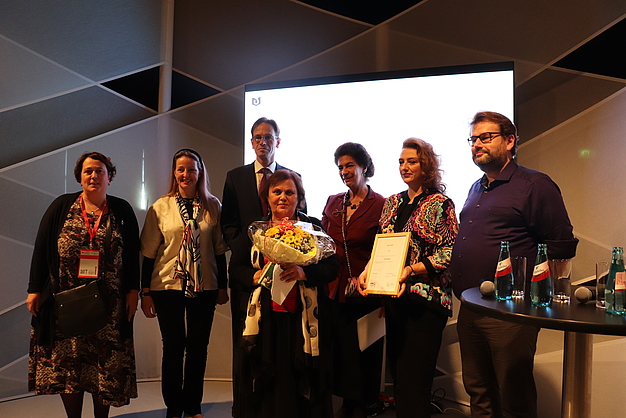 Givi Margvelashvili Prize winner Ms. Naira Gelashvili (in the middle) together with representatives of the Goethe Institute Tbilisi and DVV International, H.E. the German Ambassador to Georgia, Mr. Hubert Knirsch (third person from the left), and other companions in the Georgian Guest Pavilion of the Frankfurt Book Fair on October 10th, 2018. ©Lela Matiashvili

This year’s award ceremony for the Givi Margvelashvili Prize took place at a very special location: on October 10, 2018, the Georgian guest pavilion at the Frankfurt Book Fair provided the platform for a very atmospheric event in the course of which the Georgian writer, Germanist, and translator Ms. Naira Gelashvili were awarded the Georgian-German Cultural prize of Goethe Institute and DVV International Georgia Country Office.

Ms. Gelashvili’s achievements in the field of Georgian-German cultural relations were widely appreciated by her German publisher Mr. Jörg Sundermeier, the Head of the Goethe Institute in Tbilisi, Ms. Barbara von Münchhausen, and by Mr. Givi Margvelashvili, German-Georgian writer, philosopher, and name giver of the price. Finally, it was Ms. Maja Avramovska, Regional Director of DVV International for the Caucasus, Turkey, and Southeast Europe, who handed over the prize to Ms. Naira Gelashvili - in front of the audience of book fair visitors in Frankfurt, among them also H.E. the German Ambassador to Georgia, Mr. Hubert Knirsch.

Another award ceremony in Tbilisi will take place on the 18th of December in the Goethe Institute with the support of the German Embassy. The speech will be delivered by a critic, doctor of philological sciences, Germanist Mr. Levan Bregadze, and orientalist, poet, and translator Mr. George Lobzhanidze.